Medicine, philanthropy and a lifetime of learning 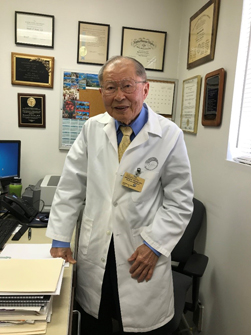 Throughout his distinguished career, Kouichi Tanaka '49, M.D. '52, has been inspired by learning. A world-renowned hematologist, Dr. Tanaka has spent decades researching, discovering and mentoring new generations of students. It was this dedication to education that inspired Dr. Tanaka and his wife, Grace Tanaka, to establish the Dr. Kouichi R. and Mrs. Grace M. Tanaka Endowed Scholarship at the Wayne State University School of Medicine.

"It is gratifying to be able to do this," Dr. Tanaka said. "It is my hope that this scholarship will inspire students to do the very best that they can in their medical education and always strive for excellence."

Always strive for excellence — this is an ideal to which Dr. Tanaka subscribes and it is reflected through his educational journey. As a Japanese American growing up during World War II, Dr. Tanaka and his family were removed from their home in California in 1942 to an internment camp in Arizona. Throughout this difficult time, his family continued to encourage his dream to pursue an advanced education, and in 1944 he left camp for Detroit to attend Wayne State University as an undergraduate and then served in the U.S. Army during 1946-48.

"At the time, many cities were not receptive toward Japanese Americans, but Detroit was open to me," he said. "I decided to stay at Wayne for my medical school training because I knew the university. I liked being a Wayne medical student, and I received an excellent education."

Before his first year of medical school, Dr. Tanaka had the fortunate opportunity to meet an elderly brother and sister living in the area. These two individuals provided Dr. Tanaka with a place to live.

"They took me in like family and provided a place for me to stay during my first two years of medical school. I think at the time they wanted to have a young person around the house, and they were very generous to me. At the beginning of my third year in medical school, I moved into the intern quarters at Providence Hospital where I had worked previous summers. In lieu of rent, I was responsible for managing the externship schedule and being available as an extern when necessary," Dr. Tanaka said.

With these generous housing opportunities and the GI Bill of Rights, which provided seventy-five dollars a month for almost three years, Dr. Tanaka was able to pay for each semester's tuition and graduate from Wayne University College of Medicine debt free in 1952.

"Establishing this scholarship was a way for me to pay back what I had received years before through my education," he said. "I hope that future generations of physicians will give back to the school that helped them achieve success."

Dr. Tanaka feels that his education at Wayne State was a critical part of his career, and he believes receiving an education in the city of Detroit played a key role in his training.

"Training at Wayne was an excellent experience for me because I had clinical opportunities to see a large variety of diseases. I received great exposure to patients and was able to really learn from them," he said.

Dr. Tanaka's ties to the medical school were also what brought him back to Wayne for residency after a one-year rotating internship at Los Angeles County General Hospital.

"I decided to come back to complete a year in a pathology residency at Detroit Receiving Hospital," Dr. Tanaka said. After the first year, however, he changed paths to specialize in internal medicine/hematology. "It combines my two passions: clinical medicine and microscopic work."

Through the Dr. Kouichi R. and Mrs. Grace M. Tanaka Endowed Scholarship, Dr. Tanaka hopes that the next generation of physicians will continue to experience similar pivotal moments at Wayne State.

He hopes, too, that the recipients of the scholarship will never lose their passion for education. "It's important that medical graduates remember two main things: Learning is a lifelong process, and every human being is worthy of care."

Dr. and Mrs. Tanaka hope that others will see the importance of supporting medical student education and establish similar funds during the Pivotal Moments Campaign. For more information about giving to the School of Medicine, contact Lori Robitaille, senior director of Major Gifts at lrobitai@med.wayne.edu or 313-993-4070.