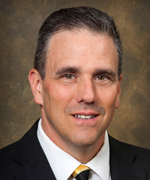 Matthew Griffin, M.D. ’91, M.B.A., F.A.C.E.P., F.A.A.E.M., attended Michigan State University and received his medical degree from the Wayne State University School of Medicine in 1991. Seeking financial support and interested in serving his country, he joined the U.S. Navy, and in exchange for a scholarship during his last three years of medical school, he served as a physician in the Navy Medical Corps.

He interned in San Diego (1991 to 1992), and then served as a general medical officer in Okinawa, Japan, and Winter Harbor, Maine (1992 to 1995). His active duty military career ended as medical officer-in-charge of a small, remote primary medical/dental Clinic in Winter Harbor. Specialty training in Emergency Medicine called him home to Detroit, where he completed training in the WSU-Detroit Receiving Hospital Emergency Medicine Residency (1995 to 1998).

He was selected as chief resident in his final year of training, and has remained with the emergency medicine group that trained him from 1998 to today. His clinical practice was complemented by an administrative role as associate EMS director for the City of Detroit (1998 to 2001). This position led him to Sinai-Grace Hospital, and then to the Emergency Medicine Residency Program director role, in which he served eight years (2001 to 2009). He has served as a board member for Medical Center Emergency Services, has been acknowledged for his teaching by residents (2001) and received the WSU College Teaching Award in 2009.These experiences contributed to Dr. Griffin’s selection as vice president of Medical Affairs for Sinai-Grace Hospital in 2009. He quickly found that performing well in this role required yet another skill set, so he completed the Physician Executive M.B.A. program at the University of Tennessee (2011). After four years in the position, he pursued a position in hospital leadership at Huron Valley Sinai Hospital, a suburban location he believed would help round out his leadership experience. He was named vice president of Medical Affairs and served in that role for two years.

Dr. Griffin has been married to his wife Inger, a pediatric nurse, for 24 years. They had four children: Matthew, Andrew, Emily and Amanda. Emily, born with “special needs,” taught him more in her three short years of life than a career full of medical rounds ever could. Through the Emily Ann Griffin Foundation (EAGF.org), “giving back” has been excellent therapy

Dr. Griffin returned to academic Emergency Medicine in May 2015 as program director of the Emergency Medicine Residency Program at Detroit Receiving Hospital. He continues to practice clinically and enjoys his return to teaching and mentoring.
Back