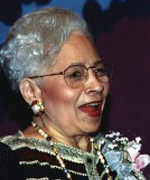 Marjorie Peebles-Meyers, M.D. ’43, is the first African-American woman to graduate from the Wayne State University School of Medicine

Dr. Peebles, who died in 2001, was born in New York in 1915. Her father was a postal clerk and her mother a seamstress. In 1927, at the age of 12, she declared to them that she wanted to be a doctor. In 1938, she obtained a master’s degree in psychology from Columbia University. She was accepted and enrolled in Howard University Medical School in Washington, D.C., in 1938.

In 1939, she married the Rev. Frederick Meyers, who was appointed rector of St. Mathews Episcopal Church in Detroit. Marjorie Peebles-Meyers transferred to the Wayne University School of Medicine in 1940. Three years later, in 1943, she graduated as the first African-American woman to receive a medical degree from the university.

She joined Eugene Shafarman, M.D., in Detroit’s first interracial medical practice in 1947. She was denied privileges at private Detroit hospitals, but Dr. Shafarman and other white colleagues admitted her patients under their names, and allowed her to treat them.

Dr. Peebles-Meyers retired from private practice in 1977, but not from medicine. She was appointed chief physician for the Ford Motor Co. World Headquarters and the Ford Credit Co., and served in that capacity until 1985.

When the Richard J. Mazurek, M.D., Medical Education Commons opened in 2009, the Marjorie Peebles-Meyers, M.D., Atrium was dedicated in her honor.
Back