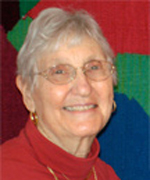 Janette Sherman, M.D. ’64, is a retired specialist in Internal Medicine and Toxicology who continues to research, speak and write on chemical and nuclear radiation that causes illness, including cancer and birth defects.

After receiving her bachelor’s degree in biology and chemistry from Western Michigan University in 1952, she worked for the Atomic Energy Commission at the University of California in Berkeley, and for the U.S. Navy Radiation Defense Laboratory in San Francisco, then in chemical and physiology research at Michigan State University.

After obtaining her medical degree, Dr. Sherman completed four years of postgraduate training, and practiced Internal Medicine and Toxicology as a clinical assistant professor for the WSU School of Medicine in Internal Medicine for the divisions of Oncology and General Medicine. In 1988, she married Donald Nevinger, her high school sweetheart, and they moved to Alexandria, Va. Don, an aeronautical engineer, died in 2005.

Dr. Sherman has spent much of her career studying the effects of radiation and other toxic agents that cause cancer and birth defects. She served on the Advisory Board for the Toxic Substances Control Act, U.S. Environmental Protection Agency, from 1976-1982; has served as an advisor to the National Cancer Institute on breast cancer, and to the EPA on pesticides. She also has advised health advocacy groups concerning breast cancer, birth defects, pesticides and toxic dump sites.

Dr. Sherman was an adjunct professor of sociology at WMU, and is a research associate with the Radiation and Public Health Project.

Dr. Sherman received the Distinguished Alumna Award from Western Michigan University in 1989, was admitted to the Cosmos Club in Washington, D.C., in 2001, and was awarded the National Research Center for Women and Families’ Foremothers Award in 2006, and the Rosalie Bertell Award, Toronto, Canada, in 2012.

She is the author of more than 70 scientific articles concerning the adverse effects from exposure to toxic agents, plus two books “Chemical Exposure and Disease: Diagnostic and Investigative Techniques” and “ Life’s Delicate Balance: Causes and Prevention of Breast Cancer.” She was a contributing editor to “Chernobyl: Consequences of the Catastrophe for People and the Environment.”
Back